After the horrific bus journey from Bukittinggi, we arrived in Parapat – a small town on the edge of Lake Toba. The bus dropped us off at 7.30am and we walked about 15 minutes to the port where we had to wait until 8.30am to catch the first ferry. The ferry took around half an hour to reach Samosir Island (the island as big as Singapore in the middle of the lake) and cost under £1. It even dropped us off to Gokon Guesthouse, in the small town of Tuk Tuk, which was overlooking the lake.

We had two rooms on the top floor, with balconies overlooking the lake for only £7 a night each. The garden was beautiful and we could swim in the lake. 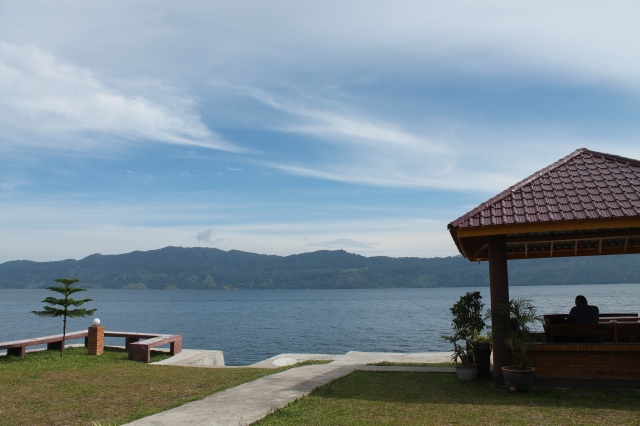 Lake Toba is a massive natural lake – about 100 km long, 30 km wide and up to 450 m deep! The lake is a result of a huge super-volcanic eruption that happened almost 80,000 years ago, allegedly killing the majority of living humans at the time. The explosion is thought to be the largest recorded explosion on earth in the last 25 millions years – pretty cool eh?!

During our five day stretch at Lake Toba, we chilled out, swam in the lake, rented mopeds and drove around half the island and went to a museum about the Batak culture – traditional, indigenous people that were known for their cannibalistic ways. I even managed to ride a moped properly and Ste even relaxed his grip on me a little which was a good sign!

Lake Toba is a really interesting place to learn about traditional cultures, relax and eat some delicious food. The best place for breakfast in Tuk Tuk is Marco Polo – their guacamole sandwhiches were soooo good!

Follow my adventures around the globe to discover how you can travel on a budget but still have amazing, unique experiences whilst supporting local communities and the the environment.